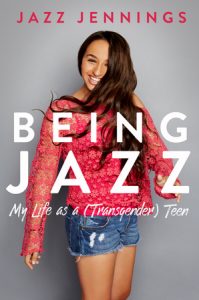 Being Jazz: My Life as a (Transgender) Teen

Jazz Jennings is one of the youngest and most prominent voices in the national discussion about gender identity. At age 5, with the support of her parents, Jazz began living as a girl. As she frequently says, “I’ve got a girl’s brain in a boy’s body.” Her journey has been remarkable for its openness and positivity. She has been in the public eye ever since her first Barbara Walters interview at age six, and has been interviewed by Oprah Winfrey, Katie Couric, Meredith Vieira, and more–becoming one of the most recognizable activists for transgender teens and adults. Being public about her experiences has led to bullying and mistreatment from those who don’t understand her. And navigating the physical, social, and emotional upheavals of adolescence is even harder when complicated by the unique challenges of being a transgender teen. But Jazz remains committed to using her own story to inspire people to accept the differences in others as they embrace their own truths.

Jazz was named two Time‘s “Most Influential Teens” list two years in a row, was one of Huffington Post’s “14 Most Fearless Teens,” and was the youngest person ever featured on Out’s “Out 100,” as well as on Advocate’s “40 Under 40” lists. In 2014 she was named a Human Rights Campaign Youth Ambassador, and received LogoTV’s 2014 Youth Trailblazer Award.