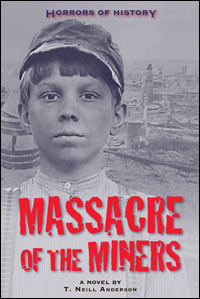 Horrors of History: Massacre of the Miners

In 1914, coal miners of the Colorado Fuel & Iron Company went on strike following the company’s refusal to grant their requests for fair wages and better working conditions. After a seven month period peppered with violence in the strikers’ tent colony in Ludlow, Greek Easter arrived and brought some celebration to the colony. But with Colorado National Guard militiamen lurking on the edges of the tent camp, a strong sense of dread was in the air. Something horrific was coming.

By noon on April 20, 1914 gunfire rained down on Ludlow sending men, women, and children to run for their lives or cower in crude dirt cellars below their tents. Eleven-year-old Frank Snyder, his father, mother, and four siblings were among these Ludlow colonists. As daylight broke the next day, the tent camp was nothing more than a smoldering pile of debris mixed with bodies of the victims.

This fourth installment in the Horrors of History series weaves real details from the Ludlow Massacre with compelling fictional dialog to tell the story of our nation’s most violent labor struggle. An example of the struggle that workers could face when confronting big business, this massacre and the ongoing violence that followed was a wake-up call that led to the rethinking of labor relations in our nation.