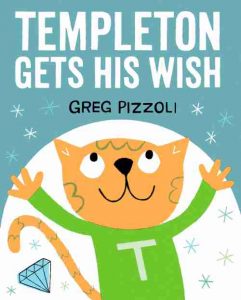 Templeton Gets His Wish

Templeton the cat doesn’t like his parents telling him to clean up, and he really doesn’t like when his brothers steal his toys. So, he makes a wish on a magic diamond, and his family disappears! At first, Templeton is over the moon. He’s free to lounge and play all day, and he never has to take a bath. But being alone might not always be as fun as he’d thought. Will another wish on the magic diamond get Templeton what he really wants? Greg Pizzoli, the Geisel Award-winning author/illustrator of The Watermelon Seed, uses his signature humor, vibrant graphics, and a touch of magic to bring this mischievous tabby to life. Praise for Number One Sam: “Pizzoli’s zingy ice-pop colors and dramatically varied page compositions take home the blue ribbon.” — New York Times * “[A] class act.” — Kirkus Reviews, starred review * “[A]nother winner from Pizzoli.” — Publishers Weekly, starred review * “‘[A] popular choice at storytimes.” — School Library Journal “Pizzoli’s talent with color, easy-to-read words, and humor is something to behold . . . This one does it all.” — Horn Book “Pizzoli’s follow-up to the 2014 Geisel Award–winning The Watermelon Seed . . . pull[s] off a far more emotional feat than you’d expect.” — Booklist “[T]his will zoom off shelves.” — Bulletin of the Center for Children’s Books Praise for The Watermelon Seed: Winner of the 2014 Theodor Seuss Geisel Award “Pizzoli legitimizes childish anxieties but also slyly exaggerates each worry to highlight the humor.” — New York Times * “It’s an expert debut…” — Publishers Weekly, starred review * “Children will love this hilarious book…The story has broad appeal, making it a great first purchase.” — School Library Journal, starred review “The illustrations, done in a graphic, flat-color style with simple linework, recall the cheerful stylings of Ed Emberley and Roger Hargreaves. While Pizzoli uses the computer to arrange his compositions, he takes extra care to hand print the pieces. Done in a three-color printing, the silk screen offers a toothiness to the page, giving fruit, animal and emotions more substance.” — Kirkus Reviews “With a sharp graphic sensibility, vibrant design, and adept characterization, Pizzoli spins the simple premise into a sweet confection, ripe with broad humor.” — Booklist Online