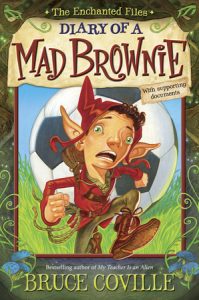 Diary of a Mad Brownie

A magical, modern day comedy by the master of funny fantasy, Bruce Coville.

This is the tale of a brownie named Angus, an eleven-year old named Alex, and the unusual curse that unites them. When Angus heads from Scotland to the wilds of America he hopes that the child he is about to “inherit” will be a sweet, neat, only child with no pets. No such luck! Together these two have to learn to understand each other so they can break the curse that binds them and now threatens Alex’s family. Told in diary entries written by Angus, and supplemented with other “documents”, this story is filled with true laugh-out-loud-humor and loads of heart to boot.