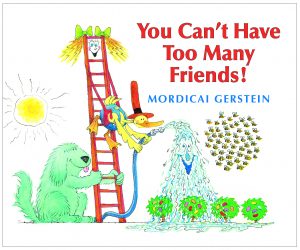 You Can’t Have Too Many Friends

In this adaptation of “Drakestail,” a classic French fairytale, Duck goes on an epic quest to retrieve jellybeans from the king with lots of help from his friends.

Duck the duck grows mouthwatering marshmallows and licorice whips. His jelly beans won first prize at the fair. No wonder the king wants to borrow the scrumptious treats. However, getting the tasty treasure trove back will not be easy. Yet with the help of a number of unusual friends and their magical powers, Duck might have some luck.

Mordicai Gerstein has reimagined a French folktale retelling it in jaunty, repetitive language that is sure to make this book a story time favorite. By combining techniques from several artistic forms including animation, comic book art, and traditional illustration, he has created a captivating new style.