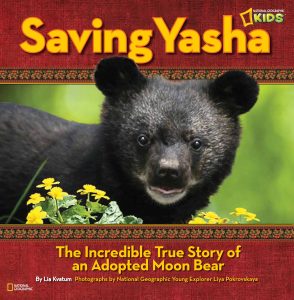 “In the early spring, when the snow was still deep, in a den inside a big hollow tree, Yasha was born. There, he and his mother lived, warm and snug. But one day, hunters came and Yasha’s mother was gone.”

So begins the true story of Yasha, an orphaned moon bear, and how he was adopted into a brand new family. Left without his mother in the Russian wilderness, Yasha was scared and alone. Would he be an orphan forever? Then, two young scientists named Liya and Sergey take him deep into the forest to teach him how to live in the wild. Yasha meets two more cubs, Shum and Shiksha, and soon the three bears are playing together like real brothers and sisters. The scientists protect their new family, but it is also their mission to raise the cubs to become wild bears with skills to survive on their own.

Through heartwarming photographs of this unique rescue story, we watch Yasha learn and grow with his new family until he’s finally ready to be on his own. Curious kids will also appreciate looking at the map of Yasha’s homeland and places where other moon bears live, as well as learning interesting facts about them.