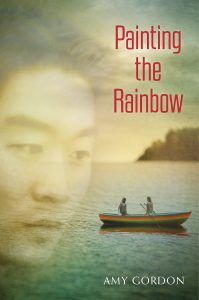 In this eloquent middle-grade novel, which takes place over the summer of 1965, thirteen-year-old Holly and her cousin Ivy accidentally discover family secrets no one has spoken of since World War II.

Holly and Ivy have always been close, but this summer at the annual month-long reunion at the Greenwood family lake house the girls seem to be growing apart. Although they spend hours together painting an old row boat the colors of the rainbow, they don’t talk about things that are important . . . until they begin to find letters and pictures relating to a Japanese boy named Kiyo. Uncovering the mystery of this ghostlike boy leads the girls to the many subjects no Greenwood adult will discuss, such as their Uncle Jesse’s death during the war.

In this insightful and expressive novel about complicated family dynamics, two girls show their elders that with honesty, courage, and empathy, even old wounds can be healed.