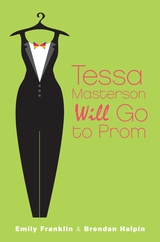 Tessa Masterson Will Go to Prom

by Brendan Halpin and Emily Franklin

As long as they’ve been able to walk and talk, it’s always been Lucas and Tessa, Tessa and Lucas. Their friendship is the stuff of legend. As prom approaches and other events unfold, Lucas suddenly awakens to romantic feelings he is having for Tessa and asks her to the prom in a very public, grandstanding way-which completely backfires when she comes out to him as a lesbian. Humiliated and confused, Lucas feels betrayed by his best friend’s secret.

When Tessa decides to publicly come out for prom, by attending in a tastefully tailored tuxedo with her female crush, the community and Lucas are outraged. But when Tessa is banned from attending prom unless she goes in a more conventional way, Lucas must decide if he should stand on the sidelines as the community bashes his former best friend. Will his own outrage and hurt feelings lead him to join the Tessa opposition? Or will he make the grandest gesture of support and friendship of all?