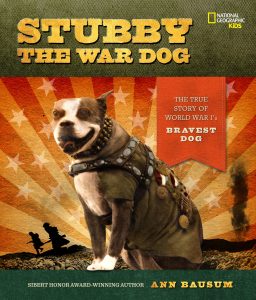 Move over, Rin Tin Tin. Here comes Sgt. Stubby! That German shepherd star of the silver screen may have been born behind enemy lines during World War I, but Stubby, the stump-tailed terrier, worked behind enemy lines, and gained military rank and honors along the way. Private Robert Conroy casually adopted the orphan pup while attending basic training on the campus of Yale University in 1917. The young recruit never imagined that his stray dog would become a war hero. He just liked the little guy. When Conroy’s unit shipped out for France, he smuggled his new friend aboard. By the time Stubby encountered Conroy’s commanding officer, the dog had perfected his right-paw salute. Charmed, the CO awarded Stubby mascot status and sent him along with Conroy’s unit to the Western Front. Sgt. Stubby’s brave deeds earned him a place in history and in the Smithsonian Institution where his stuffed body decorated with war medals can still be seen. Even 100 years later, Sgt. Stubby’s great deeds and brave heart make him an animal hero to remember and treasure.