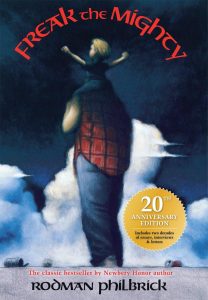 It has been twenty years–and more than two million copies, eight foreign editions, and a popular Miramax feature film–since the world was introduced to this powerful story of a unique friendship between a troubled, oversized boy and the tiny, physically challenged genius who proves that courage comes in all sizes. This simple yet timeless story explores many themes, including bullying–an important topic in today’s schools. Now we have a new edition to celebrate this poignant novel’s success.

Thirty-two pages of new content offers: extensive Q&A with the Newbery Honor-winning author; letters between the author and fans; author’s exclusive commentary on the film, THE MIGHTY, and the book’s effect on a generation of readers; and the original text.

Perfect for teachers, librarians, and perennial fans, this anniversary edition is also a spectacular introduction for new readers. FREAK THE MIGHTY is sure to remain fresh, dramatic, and memorable for the next twenty years and beyond!