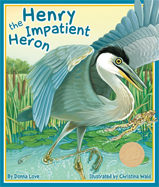 Henry the Heron couldn’t stand still! He was always moving, and it drove everyone crazy! His brother and sister yelled at him for stepping on their heads, and Mom and Dad could barely get food into his little baby mouth. But herons have to stand still to catch their food, so how would Henry ever be able to eat on his own? In Henry, the Impatient Heron, Donna Love takes readers along with Henry as he learns a valuable lesson from the King of Camouflage! Hilarious and lighthearted illustrations by Christina Wald complement the important lesson in the text. It is a meaningful lesson for both herons and kids alike, which teaches the importance of just being still!