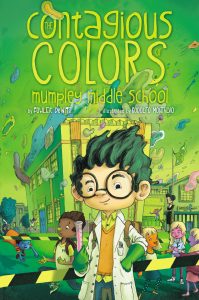 If there’s one important thing Wilmer Dooley’s dad always says, it’s this: “Where are my car keys?”

Okay, maybe not that. He also says: “Observe!”

Wilmer has always known that the greatest science comes from the keenest observations. So when he observes his classmates looking a little green…and orange…and chartreuse-fuchsia polka-dotted…he knows that it’s up to him to find the cause of this mysterious illness—and the cure.

But with his arch nemesis, Claudius Dill, hot on his heels; the eagle-eyed biology teacher, Mrs. Padgett, determined to thwart his plans; and a host of fluorescent classmates bouncing off the walls at increasingly dangerous speeds, can Wilmer prove he has what it takes to save the sixth grade from a colorful demise before it’s too late?