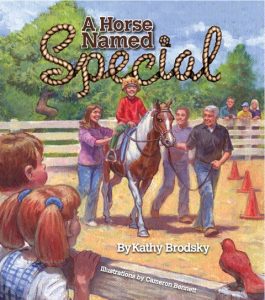 A Horse Named Special is an uplifting, engaging story in rhyme about a former race horse who overcame hardships and now does the same for people.  As a therapy horse he helps young and old deal with emotional and physical challenges. Discussion questions are included.

To find the “star” of the book, the author held a contest. People were asked to donate to equine rescue organizations when they submitted photos of their horses. The winning horse became “Special.”

After reading A Horse Named Special, a ten-year-old boy at a therapeutic riding center in Mexico was encouraged to care for a malnourished horse that had been dropped off at the stable.  The boy had neurological problems, and he would often lose consciousness several times a day.  After he started to care for the horse (whom he named “Special”) both he and Special have thrived, and amazingly, they are now entering contests!