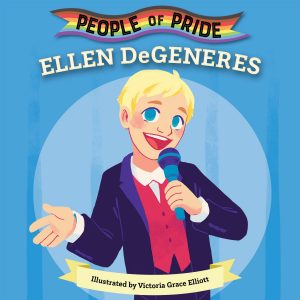 In this beautifully illustrated board book series, parents can celebrate the accomplishments of LGBTQ heroes, and introduce their little ones to the trailblazers who have shaped our world.

Ellen DeGeneres, one of the most recognizable entertainers in the world, has been making people laugh for nearly 40 years. As an actress, Ellen played the first gay lead character in a prime-time show, helping to pave the way for representation for LGBTQ people. Through her sitcoms, talk show, and iconic movies (Finding Nemo and Finding Dory), Ellen has become known for her hilarious wit and gigantic heart. Her activism and visibility have been transformative, and in 2016, she received the Presidential Medal of Freedom. Ellen, among many other LGBTQ heroes, has been an incredible force, paving the way for future generations.