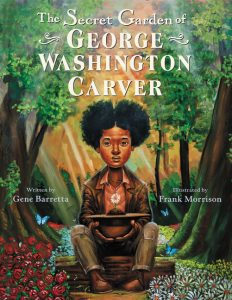 The inspirational story of George Washington Carver and his childhood secret garden is brought to life in this picture book biography by the author-illustrator team behind Muhammad Ali: A Champion Is Born. When George Washington Carver was just a young child, he had a secret: a garden of his own. Here, he rolled dirt between his fingers to check if plants needed more rain or sun. He protected roots through harsh winters, so plants could be reborn in the spring. He trimmed flowers, spread soil, studied life cycles. And it was in this very place that George’s love of nature sprouted into something so much more—his future. Gene Barretta’s moving words and Frank Morrison’s beautiful paintings tell the inspiring life and history of George Washington Carver, from a baby born into slavery to celebrated botanist, scientist, and inventor. His passion and determination are the seeds to this lasting story about triumph over hardship—a tale that begins in a secret garden.