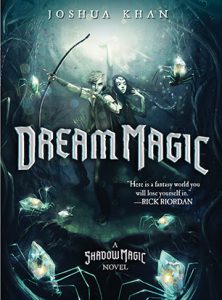 Lily the sorcerer queen and Thorn the giant-bat-whisperer are back to solve the mystery of who’s behind the many threats to Gehenna: disappearing villagers, vicious jewel spiders, and a pending troll invasion.

Things are dire for the inhabitants of Castle Gloom and the surrounding villages. The undead are leaving their graves in droves, a troll army is on the march from the north, and people are mysteriously disappearing from their homes. The people of Gehenna are blaming their misfortunes on Lilith Shadow, their young queen. They believe she has cursed them by using magic, a practice forbidden to women. With her trusty executioner among the missing and her blackguard soldiers busy battling trolls, it is up to Lily and her friend Thorn to root out the real cause of all the trouble. Their search will uncover ugly truths and eventually lead to a nightmarish confrontation with nothing less than the rulership of the realm at stake.

Zombies, ghosts, trolls, dream weavers, a black-hearted villain, and a giant hero bat are only some of the imaginative delights that await readers who relish a soaring adventure combined with a hair-raising mystery.