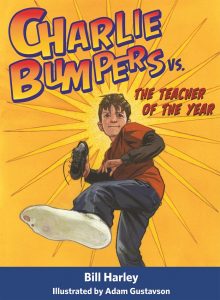 Charlie Bumpers vs. the Teacher of the Year

Shortly before school starts, Charlie Bumpers learns that he will be in Mrs. Burke’s class. It doesn’t matter that she’s been named Teacher of the Year. He’s still afraid of her. Last year when he was horsing around in the hall, he accidentally hit her in the head with his sneaker. (Don’t ask.) How will he survive a year under a teacher who is just waiting for him to make another stupid mistake?