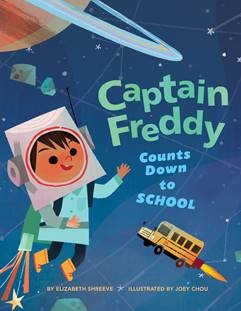 Captain Freddy Counts Down to School

Five…four…three…two…one…school is a big scary place but it’s no match for a child’s vibrant imagination! CAPTAIN FREDDY COUNTS DOWN TO SCHOOL by Elizabeth Shreeve and illustrated by Joey Chou is a colorful and spirited tale that launches readers into space alongside Freddy–a young boy hesitant about leaving home for his first day of school.

As his mom calls for him to get ready, Freddy floats through space, explores strange planets, wrestles with aliens, and ultimately learns that school is nothing he can’t handle.