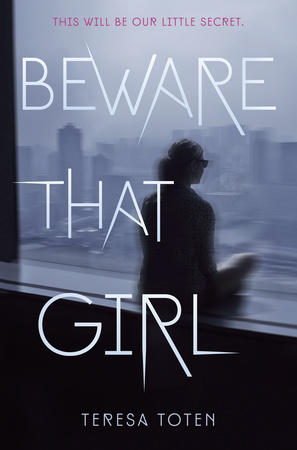 This powerful and twisted psychological thriller will draw comparisons to We Were Liars and Gone Girl, and rightly so. A totally different type of novel from Toten’s previous YA work, Beware That Girl will keep readers guessing until the very last line.

The Haves. The Have-Nots. Kate O’Brien appears to be a Have-Not. Her whole life has been a series of setbacks she’s had to snake her way out of–some more sinister than others. But she’s determined to change that. She’s book smart. She’s street-smart. Oh, and she’s also a masterful liar.

As the scholarship student at the elite Waverly School in NYC, Kate has her work cut out for her: her plan is to climb the social ladder and land a spot at Yale. She’s already found her “people” among the senior class “it” girls–specifically in the cosseted, mega-wealthy yet deeply damaged Olivia Sumner. As for Olivia, she considers Kate the best friend she’s always needed, the sister she never had.

When the handsome and whip-smart Mark Redkin joins the Waverly administration, he immediately charms his way into the faculty and students’ lives, becoming especially close to Olivia, a fact she’s intent on keeping to herself. It becomes increasingly obvious that Redkin poses a threat to Kate, too, in a way she can’t reveal–and can’t afford to ignore. How close can Kate and Olivia get to Mark without having to share their dark pasts?

BREAKOUT: Beware That Girl is a totally different novel than The Unlikely Hero of Room 13B and will ignite readers and create a stir, as the market is eager for more psychological thrillers.