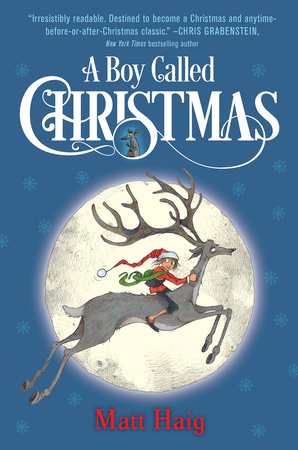 11-year-old Nikolas–nicknamed “Christmas”–has received only two gifts in his lifetime: a homemade sleigh and a doll carved out of a turnip. And although he sometimes stares longingly at the toystore window, he’s happy with his turnip because it came from his parents who love him.

When his father goes missing on a perilous journey from the North Pole, Nikolas fears that he has lost the person who matters most, so with winter coming on fast, he goes North find him. As Nikolas travels, he spots glimmers of magic through the ice and snow. He befriends a surly reindeer, bests a troublesome troll, and discovers a hidden world of enchantment in the frozen village of Elfhelm. But the elves of Elfhelm have troubles of their own: Christmas spirit and goodwill are at an all-time low, and Nikolas may be the only person who can fix things–if only he can reach his father and stop him from making a horrible mistake, before it’s too late…

Matt Haig’s fresh spin on the Santa Claus legend is full-to-bursting with humor and heart, but most importantly it’s a tale that inspires readers to believe in the impossible, and for that reason, children will be reading it for years to come.