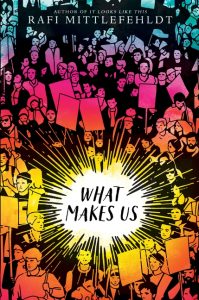 Eran Sharon knows nothing of his father except that he left when Eran was a baby. Now a senior in high school and living with his protective but tight-lipped mother, Eran is a passionate young man deeply interested in social justice and equality. When he learns that the Houston police have launched a program to increase traffic stops, Eran organizes a peaceful protest. But a heated moment at the protest goes viral, and a reporter connects the Sharon family to a tragedy fifteen years earlier — and asks if Eran is anything like his father, a supposed terrorist. Soon enough, Eran is wondering the same thing, especially when the people he’s gone to school and temple with for years start to look at him differently. Timely, powerful, and full of nuance, Rafi Mittlefehldt’s sophomore novel confronts the prejudices, fears, and strengths of family and community, striking right to the heart of what makes us who we are.

A viral video reveals a teen’s dark family history, leaving him to reckon with his heritage, legacy, and identity in this fiery, conversation-starting novel.