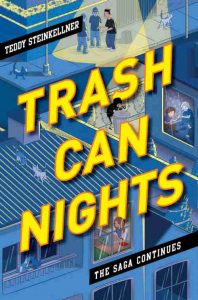 Jake Schwartz is back at San Paulo Junior High completely unprepared for his new celebrity status as the-boy-who-survived-a-gang-brawl. Facing unwanted attention from both foes and fanatics, Jake is out to make some changes—for better, or for worse.

On the Eastside of town, Jake’s former best friend, Danny Uribe, has stepped up in the ranks of the local gang, the Raiders. Now that Danny is calling the shots, he has to start making some tough decisions. Life as a Raider may not be all that Danny thought it would be.

Meanwhile, Hannah Schwartz is starting a new school year at Costa Blanca Preparatory Academy. No longer perched at the top of the social ladder, Hannah must fight for her position on the popularity pole. But frenemies have set their sights on Hannah, and they won’t make it easy for her to get ahead.

And as for Dorothy Wu, no one is as excited as she is about starting the eighth grade. With her new drama class friends and her boyfriend, Prince Jacobim, by her side, what else could a Wu ask for? But Dorothy has never navigated rocky relationship waters before. Can she help save Jake from the moody blues? Or will Dorothy end up dumped in the trash can, too?

In this remarkable follow-up to Trash Can Days, Teddy Steinkellner delivers a contemporary story that is as hysterically funny as it is heartbreaking. In the end, there will be epic dance-offs, stunning sleepover secrets, life-changing spin-the-bottle sessions, and—oh yes—lots and lots of cats.