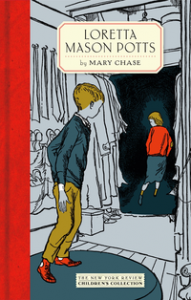 Imagine how shocked you would be if, like ten-year-old Colin Mason, you were_ the oldest (smartest, best) kid in a family of four, and then you found out that all these years, without knowing it, you’ve had an older sister, an “awful, awful, bad, bad, girl—Loretta Mason Potts.” Who? What? Wait! … But this is only the first of many surprises that lie in store for Colin, as things get curiouser and curiouser very fast. Loretta (a glum gangly girl and so very very rude!) comes home and before you know it, Colin is secretly following her down a hidden tunnel that leads from a bedroom closet to an astonishing castle, where a charming and beautiful countess keeps court attended by a dapper and ever-obliging general, and in this world everybody loves Loretta (especially when she’s rude), so much so that they’re begging her to stay with them forever. What is the secret behind this mysterious other world and how does it connect to the many secrets in the Mason family? It’ll take a spellbinding, hair-raising adventure, involving not just Colin and Loretta but their mother and the rest of the family, to work that out.