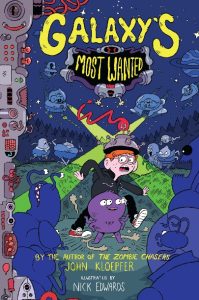 When Kevin Brewer and his science camp buddies Warner, Tara, and TJ accomplish the impossible—summon ALIEN LIFE to Earth!—they think it’s going to be all fun and games. Yet their new, fuzzy extra-terrestrial pal, Mim isn’t here to play—he needs a place to hide.

A gang of interstellar predators are on a mission to capture Mim, but Kevin’s not going to let his greatest scientific discovery be taken so easily. Putting their planet-sized brains together, Kevin and his friends must plot a way to stop the alien takeover and kick those intergalactic goons out of this world. But can Kevin and his pals really trust Mim? What happens if their new pet martian is actually the baddest alien in the galaxy and they’ve just helped him defeat the good guys?

John Kloepfer has done it again! GALAXY’S MOST WANTED is the perfect blend of middle grade humor and shenanigans, side-splitting descriptions, a fast-paced original plot, a cast of diverse and endearing tween characters, and a slew of creepy, crawly, otherworldly aliens—plus epically awesome illustrations by Nick Edwards. With all of these elements working together, this series is poised to be an astronomical hit!