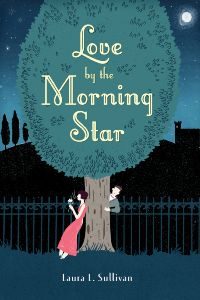 Love By the Morning Star

On the brink of World War II, two girls are sent to the grand English country estate of Starkers. Hannah, the half-Jewish daughter of a disgraced distant relative, has been living an artistic bohemian life in a cabaret in pre-war Germany and now is supposed to be welcomed into the family. Anna, the social-climbing daughter of working-class British fascists, is supposed to be hired as a maid so that she can spy for the Nazis. But there’s a mix-up, and nice Hannah is sent to the kitchen as a maid while arrogant Anna is welcomed as a relative.

And then both girls fall for the same man, the handsome heir of the estate . . . or do they?
In this sparkling, saucy romance, nearly everything goes wrong for two girls who are sent to a grand English estate on the brink of World War II—until it goes so very, very right!