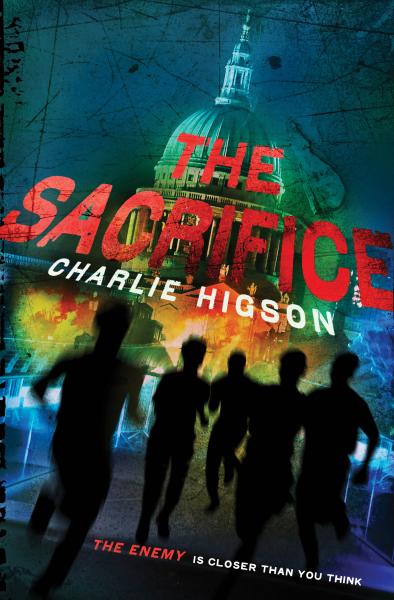 This thrilling fourth installment in the Enemy series begins one minute and thirty-six seconds after THE ENEMY ends. Three fresh storylines will keep readers on the edge of their seats!

The Sacrifice picks up after Small Sam and The Kid arrive at the Tower of London at the end of The Dead. Though Sam finds safety and friendship at the Tower with Jordan Hordern’s crew, he can’t settle down. The only thing he wants is to be reunited with his sister, Ella. Despite Ed’s protests, Sam and the Kid strike out westward, through the no-go zone. Meanwhile, Shadowman is tracking Saint George across north London, watching him build up his army. Shadowman knows that Saint George is an extremely dangerous threat, but no one will take his warnings seriously. Some answers to the questions we’ve been wondering about–What is the Disease? Where did it come from? Is there a cure?–are addressed by an unexpected source: a diseased adult nicknamed Wormwood who has the ability to speak, though his ravings are difficult to decipher. Unspeakable horror, edge-of-the-seat suspense, and stomach-churning plot twists continue in Book 4 of Charlie Higson’s masterful Enemy saga.