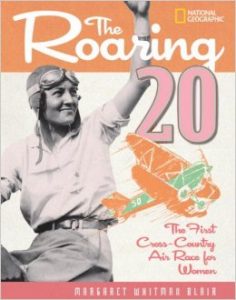 The Roaring Twenty: The First Cross-Country Air Race for Women

Adventure, excitement, and fearlessness take wing in the dramatic true story of the twenty aviatrixes who set off on the first Women’s Cross-Country Air Derby. Readers will thrill to the feats of “the roaring twenty,” the daredevil pilots who pioneered women’s aviation in this 2800-mile race from Santa Monica, California, to Cleveland, Ohio, in 1929.

This cross-country odyssey was the first of its kind: nine days of grueling endurance that was dismissively dubbed the “Powder Puff Derby” by the press. Yet the American public was captivated.

The nation already knew and loved Amelia Earhart, and it soon warmed to such colorful characters as the cigar-smoking stunt flyer Florence Pancho Barnes, former wing-walker Phoebe Omlie, and New York society rebel Opal Kunz. The experienced adventurer Marvel Crosson was one of the early favorites—until her mysterious disappearance. Americans eagerly followed the daily drama, charmed, then shocked, as the race left a twisting trail of intrigue in its slipstream.

Superbly illustrated with fifty evocative duotone photographs, and featuring a detailed National Geographic map of the route, this is a book to capture the imagination and dreams of young girls from coast to coast.