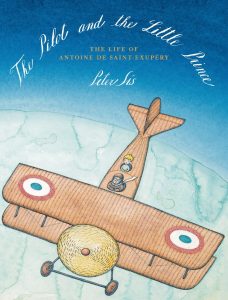 The Pilot and the Little Prince

Antoine de Saint-Exupéry was born in France in 1900, when airplanes were just being invented. Antoine dreamed of flying and grew up to be a pilot—and that was when his adventures began. He found a job delivering mail by plane, which had never been done before. He and his fellow pilots traveled to faraway places and discovered new ways of getting from one place to the next. Antoine flew over mountains and deserts. He battled winds and storms. He tried to break aviation records, and sometimes he even crashed. From his plane, Antoine looked down on the earth and was inspired to write about his life and his pilot-hero friends in memoirs and in fiction. Peter Sís’s remarkable biography celebrates the author of The Little Prince, one of the most beloved books in the world.