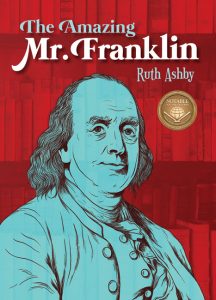 Everyone knows Benjamin Franklin was an important statesman, inventor, and a signer of the Declaration of Independence. But did you know he started the first public library in America?
Ben Franklin was always a “bookish” boy. The first book he read was the Bible at age five, and then he read every printed word in his father’s small home library. Ben wanted to read more, but books were expensive. He wanted to go to school and learn, but his family needed him to work. Despite this, Ben Franklin had lots of ideas about how to turn his love of reading and learning into something more. First he worked as a printer’s apprentice, then he set up his own printing business. Later, he became the first bookseller in Philadelphia, started a newspaper, published Poor Richard’s Almanac, and in 1731, with the help of his friends, organized the first subscription lending library, the Library Company.