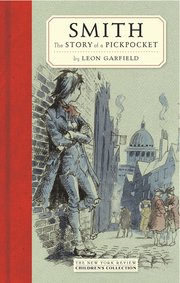 Smith: The Story of a Pickpocket

Twelve-year-old Smith is a denizen of the mean streets of eighteenth-century London, living hand to mouth by virtue of wit and pluck. One day he trails an old gentleman with a bulging pocket, deftly picks it, and as footsteps ring out from the alley by which he had planned to make his escape, finds himself in a tough spot. Taking refuge in a doorway, he sees two men emerge to murder the man who was his mark. They rifle the dead man’s pockets and finding them empty, depart in a rage. Smith, terrified, flees the scene of the crime. What has he stolen that is worth the life of a man?

Smith is a gripping, engrossing, and utterly diverting tale of high adventure related by a writer whose scintillating style is matched only by the dazzle of his plotting. In the words of Lloyd Alexander, “Garfield is unmatched for sheer exciting storytelling. The reader simply can’t stop reading him.”