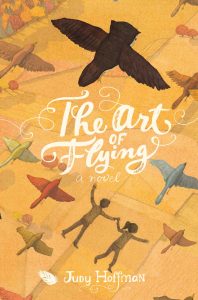 The Art of Flying

Fortuna Dalliance is practical. Rational. Clever. But when she finds herself at the doorstep of an adventure, she discovers something that has been inside her all along: the courage to step through.

The old Baldwin sisters are in trouble, and they’ve asked Fortuna to help them out of a fix. The sisters have accidentally turned a swallow into a boy, and he refuses to be turned back! But if Martin doesn’t return to his original form within five days, he’ll remain a boy forever . . . and the Baldwin sisters will have a lot to answer for. Fortuna’s not sure she believes in magic, and once she’s gotten to know Martin, she’s not sure she wants him to be changed back. As Fortuna figures out what it truly means to be a friend, she must decide whose side she’s on—before it’s too late!