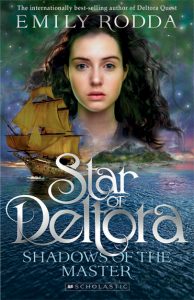 Shadows of the Master, Star of Deltora Book 1

Mystery and danger surround Britta, daughter of once-beloved, now-disgraced trader Dare Larsett, as she seeks to reclaim her destiny by vying for the covetous apprenticeship to the trader Rosalyn aboard what was once her father’s ship, the Star of Deltora. A new four-book Deltora series from the acclaimed Emily Rodda.