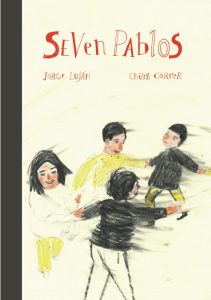 Pablo lives in Chile with his hardworking father. But Pablo also lives in Ecuador, deep in the Amazon rainforest. There is another Pablo living with his family in Mexico, after fleeing the dictatorship in Argentina. And in New York, Pablo shares an overcrowded apartment in the Bronx, where he’s only allowed home for twelve hours at a time. Pablo is the son of a rural schoolteacher in Peru, and another Pablo picks through garbage to survive in Rio de Janiero, while yet another Pablo has big plans to get from Guatemala to Los Angeles. Poet Jorge Luján tells the powerful story of seven different Pablos living seven different lives in this world we all call home.