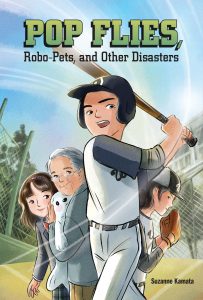 Pop Flies, Robo-Pets, and Other Disasters

Thirteen-year-old Satoshi Matsumoto spent the last three years living in Atlanta where he was the star of his middle-school baseball team – a slugger with pro potential, according to his coach. Now that his father’s work in the U.S. has ended, he’s moved back to his hometown in rural Japan. Living abroad has changed him, and now his old friends are suspicious of his new foreign ways. Even worse, his childhood foe Shintaro, whose dad has ties to gangsters, is in his homeroom. After he joins his new school’s baseball team, Satoshi has a chance to be a hero—until he makes a major-league error.