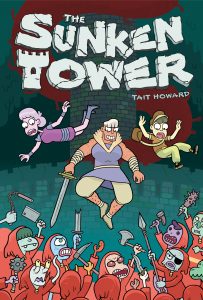 Set deep underground in a sunken city, a young wizard and his two companions embark on a journey to escape the clutches of an evil cult.

Dig is having a very bad day. His bag is broken, he can’t catch a break at the local market, and just when things are looking up, he’s kidnapped by a couple of Blood Cultists and taken to the underground city that serves as their base, where he’ll make a tasty human sacrifice for an unspeakably horrible monster. Thrown into a dungeon, he’s left to feel sorry for himself.

But his new cellmates, Iana and Crina, are ecstatic about Dig’s appearance. He’s a wizard, which means he knows magic, which means he can help get them all out of this terrible sunken city for good! If Iana can get her hands on a sword, and Crina can remember the way to the giant tower that leads to the surface, then everything will go smoothly.

That is, until the Blood Cultists catch up with them, and Dig’s magical abilities are put to the ultimate test. Because Dig’s been keeping a secret. And if it’s found out… he may never see the surface again.