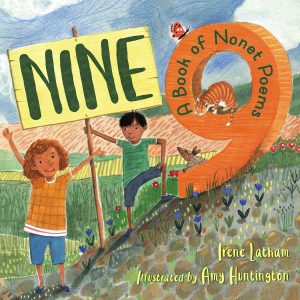 Nine: A Book of Nonet Poems

Fans of clever poetry and numbers rejoice! Nine is a book of nine-line poems called nonets, all about the number nine! Each poem in this clever collection is a nonet: a nine-line poem that starts with nine syllables in the first line and ends with one syllable in the ninth line (or the reverse). But these nonets go even further! Every one is also written with the number nine at its heart. There’s plenty to love and learn: topics include the nine months it takes a baby to be born, cats’ nine lives, baseball’s nine players, and the nine-banded armadillo. Some feature history, such as the Little Rock Nine, the spacecraft Apollo 9, the ninth president; others explain idioms, like “dressed to the nines,” “cloud nine,” and “the whole nine yards.” Explore these and more with nonets galore!