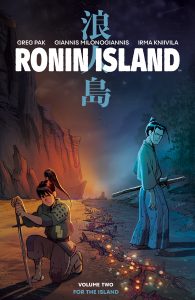 THE WAR WAS ONLY THE BEGINNING.

After their harrowing journey to the mainland to reason with the Shogun’s forces, young Hana and Kenichi have been separated, forced to find their own ways back to the Island. Kenichi, cast out in exile, must learn to survive the wilderness on his own without the support his noble upbringing previously provided; Hana must also survive a dangerous foreign environment, as she travels alongside the Shogun’s caravan back towards the Island and contends with the cutthroat political in-fighting of the elite.

The New York Times best-selling author Greg Pak (Star Wars) and artist Giannis Milonogiannis (Old City Blues) present the next chapter of the critically-acclaimed action series about a new generation of heroes struggling to do the right thing in the face of an increasingly complicated and deadly world.