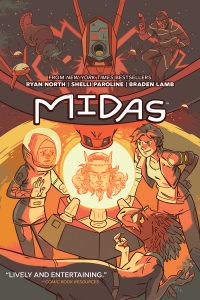 Space captain Joey, navigator Fatima, and scientist (and dinosaur) Cooper are headed to Earth—a planet completely sectioned off, abandoned, and covered in gold—and are confronted by the most powerful weapon in the universe: some ancient dead guy’s body?! Now they gotta keep King Midas’ body from being dropped on planets across the universe, and figure out exactly what to do with a gross dead dude with one truly ridiculous superpower.