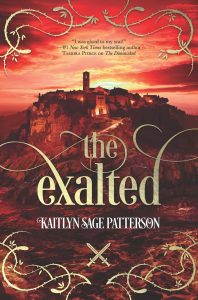 Though Vi and Bo were reunited at the end of Patterson’s debut, The Diminished, this sequel sees these long-lost twins separated again on different missions to save the Alskad Empire. As Vi seeks out the rebels in Ilor, Bo returns to the capital to take up his role as heir to the throne. When his grandmother, Queen Runa, is assassinated, Bo is forced to flee Penby and seek aid from a fellow monarch, Queen Noravia of Denor.

But Noravia has sinister plans of her own. Soon after arriving in Denor, Bo is coerced into signing a marriage contract in exchange for the military support he needs to take back his throne…and the antidote to an insidious poison that the temple is using to consolidate their power. Half a world away, Vi is rallying the rebel forces to Bo’s cause, determined to free him from Noravia’s clutches. Only together will they be able to overcome the odds stacked against them and restore peace to the Empire.