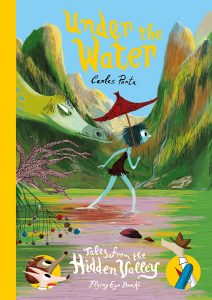 Summer has finally arrived in the fourth book of Carle’s Porta’s Tales from The Hidden Valley series! Beloved characters return in the final book of this whimsical series for fans of Tove Jansson’s Moomins.

When a new, watery friend appears, Ticky, Mister Cold and the rest of the pals explore an exciting new underwater world. But a great monster lurks beneath the surface, and our joyous friends sure are causing quite a fuss! Will they be able to escape its terrible jaws?