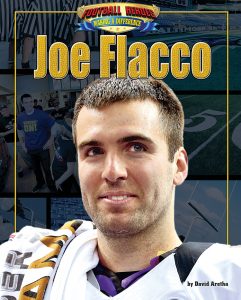 When Joe Flacco joined the Baltimore Ravens in 2008, the rookie thought he would have to wait a long time to show off his skills. That didn’t happen. First the team’s starting quarterback got injured, then the backup became sick. Joe was the new starting quarterback! He was under pressure to lead his team to victory, and he quickly stepped up to the challenge. In 2013, he led the Ravens to a Super Bowl victory against the San Francisco 49ers. Joe is thankful for all the support Baltimore fans have given him, and he looks for ways to give back. One cause close to his heart is Special Olympics Maryland (SOMD). Joe loves to show up at games and cheer on Special Olympics athletes. He also gives time and money to the Baltimore Humane Society (BHS), a shelter that works to find homes for stray cats and dogs. In Joe Flacco, readers will follow this NFL superstar’s football career and discover how he has made a difference in people’s lives both on and off the field. Large, full-color action photos and engaging text will keep readers turning the pages for more.