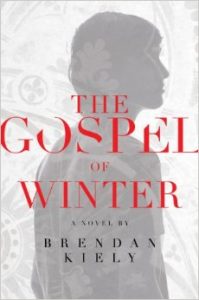 Aidan Donovan is a smart and wary sixteen-year-old whose family is combusting around him. Old Donovan, Aidan’s father, spends most of his time in Brussels, rescuing the world’s economy and ignoring his only son except for the occasional lecture on public virtue; his mother, a former ballerina, is theatrically miserable and seductively needy.

Aidan finds solace in a bump or two of Adderall, his father’s wet bar, the friendship of the Donovans’ housekeeper Elena, and the attentions of Father Greg, the backslapping priest who takes time out from his fundraising for Most Precious Blood to actually listen to Aidan.

Then, as Christmas hits, Aidan’s world collapses into a crisis of trust when he realizes the way that Father Greg’s professed love is poisonous. Aidan escapes into aimless nights with classmates at Country Day Academy: Josie, a girl he just might love; Sophie, who’s just a little wild; and Mark, the pot-smoking swim team captain whose own secret agonies converge with Aidan’s—in a climax of tragedy that will leave Aidan wiser, and ultimately transformed.