Home > Readers > Reading Lists > CBC Showcase > For the Reader Who (Spring 2017) > Christmas from Heaven: The True… 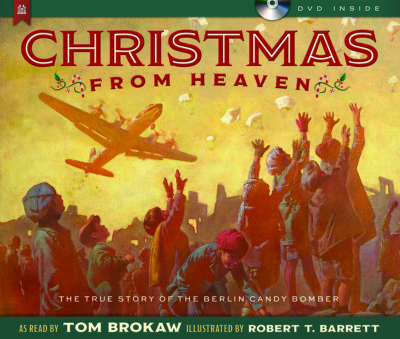 Christmas from Heaven: The True Story of the Berlin Candy Bomber

For the Reader who enjoys an inspiring biography of a hero of WW II.

Christmas from Heaven is the story of the humble beginnings of what became a beacon of hope to a war-torn land, the story of Gail Halvorsen, a young pilot in the US Army Air Corps who was assigned as a cargo pilot to the Berlin Airlift, in which US forces flew much-needed supplies into a Soviet-blockaded Berlin.

As he performed his duties, Lt. Halvorsen began to notice the German children gathered by the fences of Tempelhof Air Base. Knowing that they had very little, he one day offered them some chewing gum. From that small act, an idea sprang: He would bomb Berlin with candy. Fashioning small parachutes, he and his crew sent them floating down as they approached the Berlin airport, wiggling the wings of their C-54 as a signal to the children that their anticipated cargo would soon arrive.

Lt. Halvorsen became known by hundreds, if not thousands, of children in Berlin as Uncle Wiggly Wings or The Candy Bomber. Word soon spread, and donations of candy and other supplies poured in from sympathetic Americans. Lt. Halvorsen’s small idea became a great symbol of hope not only to German children in a bombed-out city but to all those who yearned for freedom.