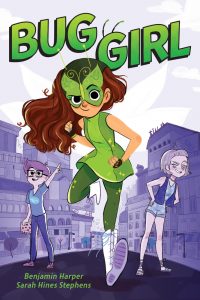 Amanda Price adores all things bug-related—from spiders to mantises—like, seriously loves them. Unfortunately most of her fellow sixth-graders do not share her invertebrate obsession. They’re grossed out by it. Especially Amanda’s ex-best friend, Emily, who thinks Amanda is creepy weird.

But when mysterious invaders menace the town of Oyster Cove and take both Amanda and Emily’s mothers captive, Amanda unexpectedly develops amazing insectile powers! Newly equipped with antennae and a glistening exoskeleton she uncovers a secret that changes everything.

Now Amanda has to act fast or her town and her mom are doomed! There’s just one complication…she needs Emily’s help.

Suddenly Amanda’s worst enemy becomes her best ally, but working together may be even harder than saving their town from being squashed like a…well…

BUG GIRL. She’s got the buzz.