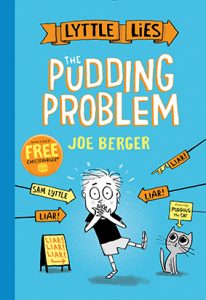 A boy must untangle the web of lies he’s created in order to prove his innocence when strange things start happening in this humorous and cheeky illustrated middle grade novel in the tradition of the Timmy Failure series.

Sam Lyttle is prone to stretching the truth. Most of his lies are harmless; tall tales and the product of an overactive imagination. So when Sam is summoned to explain a strange discovery—a ping-pong ball in a jar of peanut butter—and denies involvement, no one believes him. Then more seemingly unrelated peculiarities emerge, and Sam categorically denies any knowledge of those, too.

In between these mysterious accusations, and with evidence mounting against him, Sam ruminates on the different sorts of lies he has told using examples from his past. Meanwhile, two pounds of potatoes wind up in the washing machine.

Sam comes to a decision: he decides it is time to come clean about this latest tangled web. He gathers his family to hear the truth. The whole truth. Or is it? Could it be that this final “truth” is, in fact, another lie?