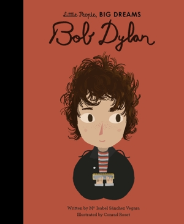 Bob Dylan was born in Duluth, Minnesota. As a teenager, he played in various bands and, over time, his interest in music deepened, with a particular passion for American folk music and blues. Dylan moved to New York City in 1961, where he began to perform poetry and music in clubs and cafés in Greenwich Village. There, he recorded a number of albums that made him one of the most influential musicians of history. This fascinating book features stylish and quirky illustrations and extra facts at the back, including a biographical timeline with historical photos and a detailed profile of the musician’s life.