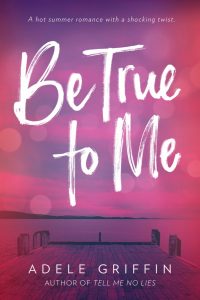 Be True to Me

A riveting tale of romantic suspense with a shocking twist ending set within the gates of a Fire Island colony of the super rich.

Jean, a privileged, sometimes cruel, often insecure, and always envious girl, is accustomed to living in her glamorous older sister’s shadow. So when Gil Burke, a handsome newcomer with uncertain ties to one of the most powerful families in the exclusive enclave of Sunken Haven, notices Jean, she is smitten. Then Fritz, a girl from outside the gilded gates who humiliated Jean in the island’s tennis championship last year, falls for Gil herself. Soon the girls are competing for much more than a tennis trophy, with higher stakes than either of them can imagine.

Through the alternating perspectives of Jean and Fritz against a backdrop of sunbathing, lobster bakes, and the Bicentennial summer, Adele Griffin captures the angst of feeling like you don’t belong and the urgency of first love with masterly prose and a sharp, intricate wit perfect for fans of E. Lockhart’s We Were Liars.