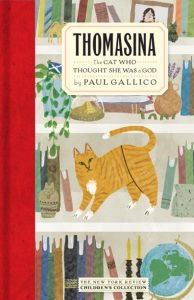 Thomasina: The Cat Who Thought She Was a God

Thomasina is the beloved pet cat of seven-year-old Mary, whose strict father is the town’s vet. When Thomasina falls ill, Mary’s father sees no other option but to put the cat down. Heartbroken by his cruelty, Mary stops speaking to her father and falls dangerously ill herself. Meanwhile, Thomasina is rescued by Lori, a young woman who lives alone in an isolated glen and is rumored to be a witch with healing powers. While Lori helps Thomasina recover from her ordeal, Mary’s health continues to deteriorate, and it is only when Thomasina makes her miraculous return, on a dark and stormy night, and is reunited with her owner that Mary is pulled from the brink of death.