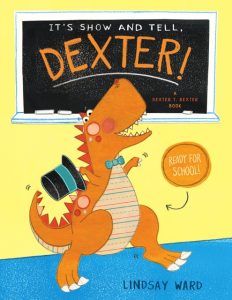 Dexter T. Rexter is going to school. But will anyone like him?

Tomorrow is the biggest event ever in Dexter’s life: his best friend, Jack, is taking him to school for Show and Tell Day! Dexter has been getting ready for weeks. But now he’s a little nervous. What if the other kids don’t like him? So Dexter decides to come up with a plan. He’ll wear a costume. Dinosaurs in bunny ears look good, right? He’ll recite state capitals starting with…uh…ah…er. Then he realizes something. He can’t dance. He can’t recite things. He doesn’t have ANY skills. What’s a dino to do?

This comical, interactive tale of belonging, friendship, anticipation, and first-day-at-school jitters lets readers experience the excitement and nervousness along with Dexter—and even offer him a little advice along the way.