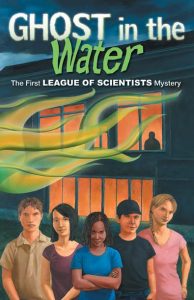 The League of Scientists: Ghost in the Water

by The Editors at Science, Naturally!

After moving to a new school, seventh grader John Hawkins becomes something of a loner. His life would have been just fine if it weren’t for Dowser, whose favorite pastime is tormenting John. All this changes when his interest in robotics lands him an invitation to join four of his classmates in a secret group called The League of Scientists. John, and his new friends, Malena, Hector, Natsumi and Kimmey, pool their knowledge of biology, technology, logic, and chemistry to unravel mysteries that haunt the quiet town of East Rapids.

The League is in a race against time to uncover the secret of the ghost who is terrorizing the middle school swimming pool. Will Dowser ever leave John alone? Can they expel the ghost in time for their star swimmer to compete against their cross-town rivals?

Join the League as they race to beat the clock in Ghost in the Water, the first adventure in this new and exciting League of Scientists science mystery series!